This release includes several fixes and a few new features.

You can now share posts to your connected chatrooms :) 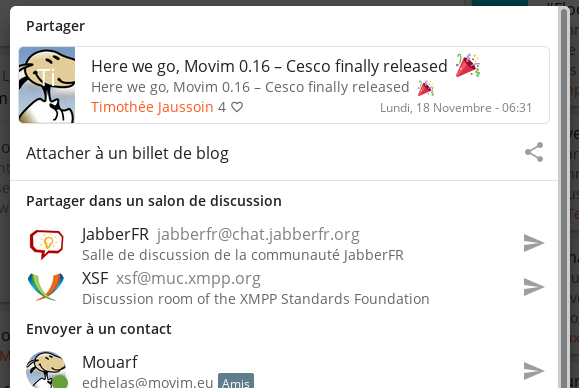 Communities layout were a bit redesigned, publication rules are now displayed clearly in the right column and the header shows more information on mobile.

All the messages that you sent in the one to one discussions can now be edited.

The videoconferencing feature was heavily refactored and several issues were fixed during this process. A new XEP was also used partially to improve the call negociation flow, XEP-0353: Jingle Message Initiation.

In the database an index was added on the key that was tracking contacts avatars. This sounds maybe a bit technical to you but this small fix boost quite a lot the performances during the login process, when you join a chatroom (especially that one) or when a contact updates his/her avatar. Because it's a database change you should run the database migrations when updating from 0.16 to 0.16.1.

All the entities that are on the XMPP network needs to declare what they are capable of to the others. This allows feature discovery and negociation and is specified in the #XMPP extension XEP-0115: Entity Capabilities. After the big code refactor of the handling of those #capabilities within the Movim codebase some other small improvements and fixes were done to wrap up properly this feature.

Presences sent to MUC are now generated the same way than those sent to contacts, this fixes #711.

The SQL_DATE constant was renamed to MOVIM_SQL_DATE to prevent some naming conflicts (#820).

PHP 7.4 was released a few days ago, so the upcoming version will focus on fixing issues to make Movim fully compatible with that version.

This new PHP release also includes an exciting feature that allows #PHP developpers to call directly C libraries in their codes. This could allow #Movim to directly use the libsignal C library and therefore (finally) allow OMEMO end-to-end-encryption to be implemented. This will be a lot of work and verifications so we're not promissing anything anytime soon. Stay calm please!