Plasma, the desktop environment from the KDE team has a big new upgrade coming with the release of Plasma 5.21 Beta and it's looking to be a thing of beauty.

Their current aim with Plasma 5.21 is to finely polish the experience overall, with the KDE team saying it pulls in "many improvements into Plasma’s design, utilities and themes, with the aim of providing end users with a more pleasant and accessible environment".

Plasma 5.21 will bring with it a redesigned application launcher, theme improvements, a brand new UI for the Plasma System Monitor, Plasma Firewall settings added to the overall system settings to let you configure both UFW and firewalld, plenty of UI cleaning done on system settings and much more.

It's big in many areas, not just design tweaks, with a big plan in progress to have KDE push for first-class Wayland support with KWin. They say that Plasma 5.21 "makes great headway to reach that goal". KWin, the compositor, has been "extensively refactored" and so you should see reduced latency throughout the entire stack. 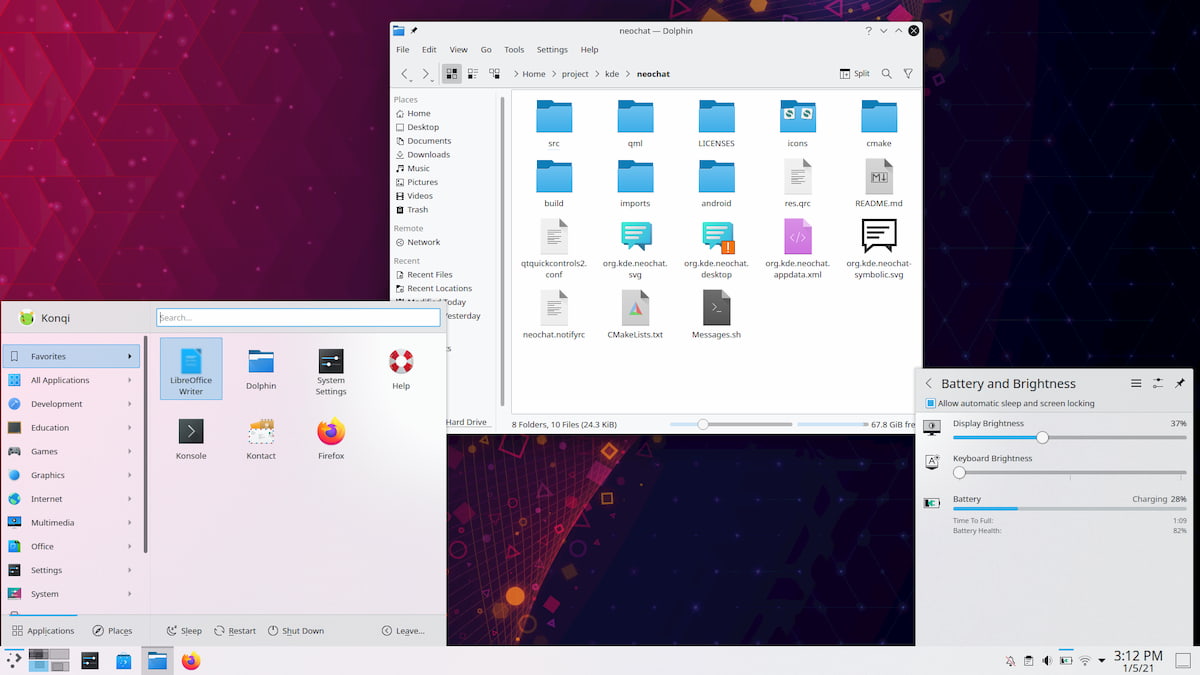 Also available are mixed refresh rate setups with Wayland and Plasma 5.21. So now you can have one set at 144HZ and another at 60Hz and things won't bug out on you, and they say that early support for "multiple GPUs was also added on Wayland". Other Wayland interactions got improved too like virtual keyboard supporting GTK apps, along with many other Plasma components and KDE apps being more ready for Wayland.

Love a mix of dark and light themes? They have you covered there too with the introduction of Breeze Twilight as an official theme. It will give a dark theme for Plasma directly while mixing in light styles for applications. I must admit, it does look pretty good in they shot they showed off: 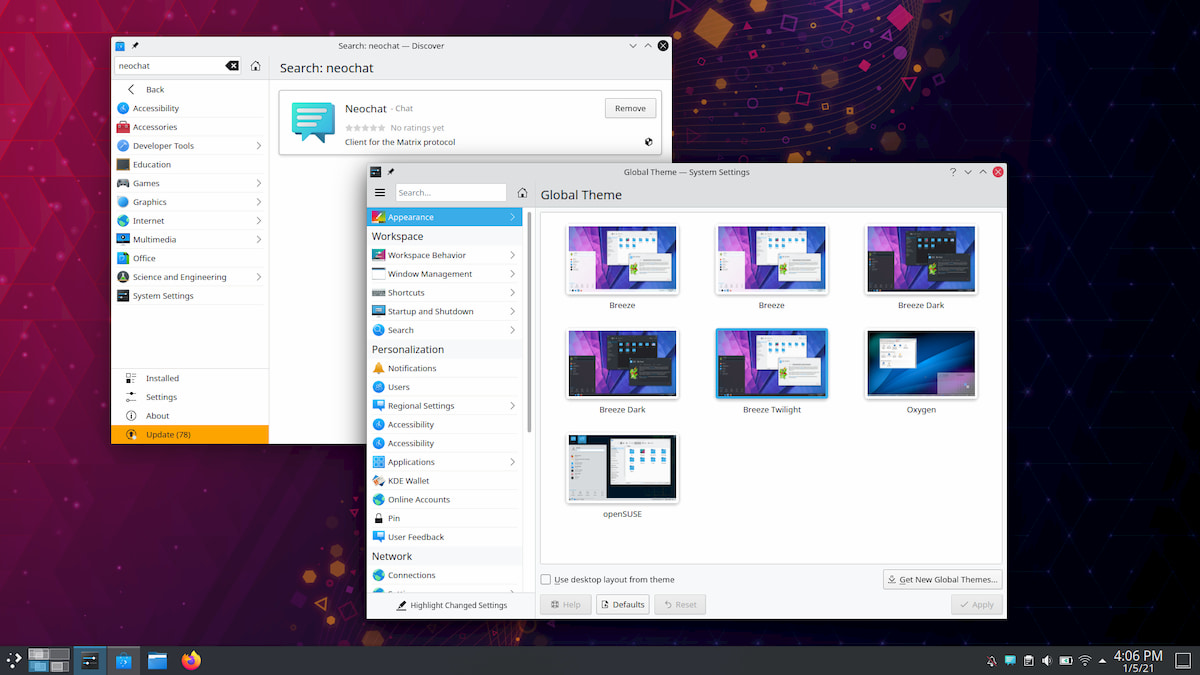 KDE Plasma desktop is unarguably the pinnacle of customization, as you can change almost anything you want. You can go to the extent of making it act as a tiling window manager. KDE Plasma can confuse a beginner by the degree of customization it offers. As options tend to pile on top of options, the user starts getting lost.

So this guide is pretty useful, and I thought I knew it all, but had never noticed the alternative launcher option (no 7 in list).

A KDE developer who regularly blogs about all the work going into the KDE ecosystem through the likes of the Plasma desktop environment and the various applications, has given an overview of what they expect to see through 2021.

Sounds like there's plenty of exciting work coming up for KDE and Plasma this year! Nate Graham mentions in the latest post that amongst other things, they might finally have a "Production-ready Plasma Wayland session". A lot of work went into this through 2020 and before that Graham mentioned that it "felt like a mess" but a whole year of progress changed that. Through 2021 we can expect to see a "trend of serious, concentrated Wayland work to continue in 2021" and to be in a better shape for more people to use.

Quite a long time coming, as it's been said that Wayland would replace X11 for years now and having KDE in top shape with it will certainly help push it forwards even more.

Something else exciting coming up is a replacement for the 'Kickoff' application launcher (Windows users would know it as a 'Start menu'). There's a merge request open, which they expect to be available in the Plasma 5.21 release for the new design and it's looking really quite slick: 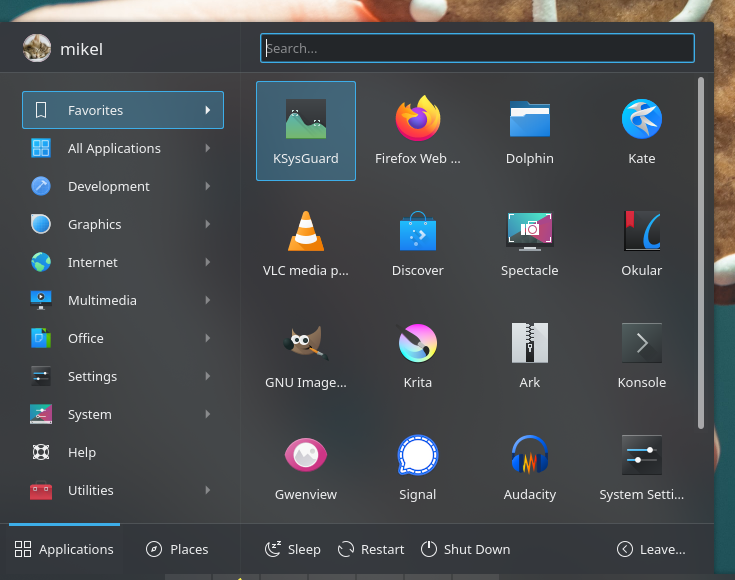 On top of all that they're looking to get fingerprint support ready throughout the entire tech stack including everywhere you would need it from the login screen and the lock screen to their KAuth authorization library.

KDE does always look impressive, with tons of options for customization and hopefully 2021 shall be a big year for it.

Your daily dose of not-linux-gaming news, with an announcement for fans of Linux gadgets and tech as KDE has teamed up with Pine64 to bring out a PinePhone - KDE Community edition.

Sounds like it's going to be quite a nice device for enthusiasts, especially if you're after a proper Linux phone that isn't Android and will respect your privacy - something I've tried to become more conscious of myself over the last few years. For extra privacy and security, and something I wish more phones had, there's hardware kill-switches for the modem, WiFi/Bluetooth, microphone and cameras.

Just as awesome though is that it's been designed for mobile / desktop convergence. So you can hook up a USB-C dock to connect it up with a mouse, keyboard, monitor and more to provide a more desktop-like experience using this useful little device. 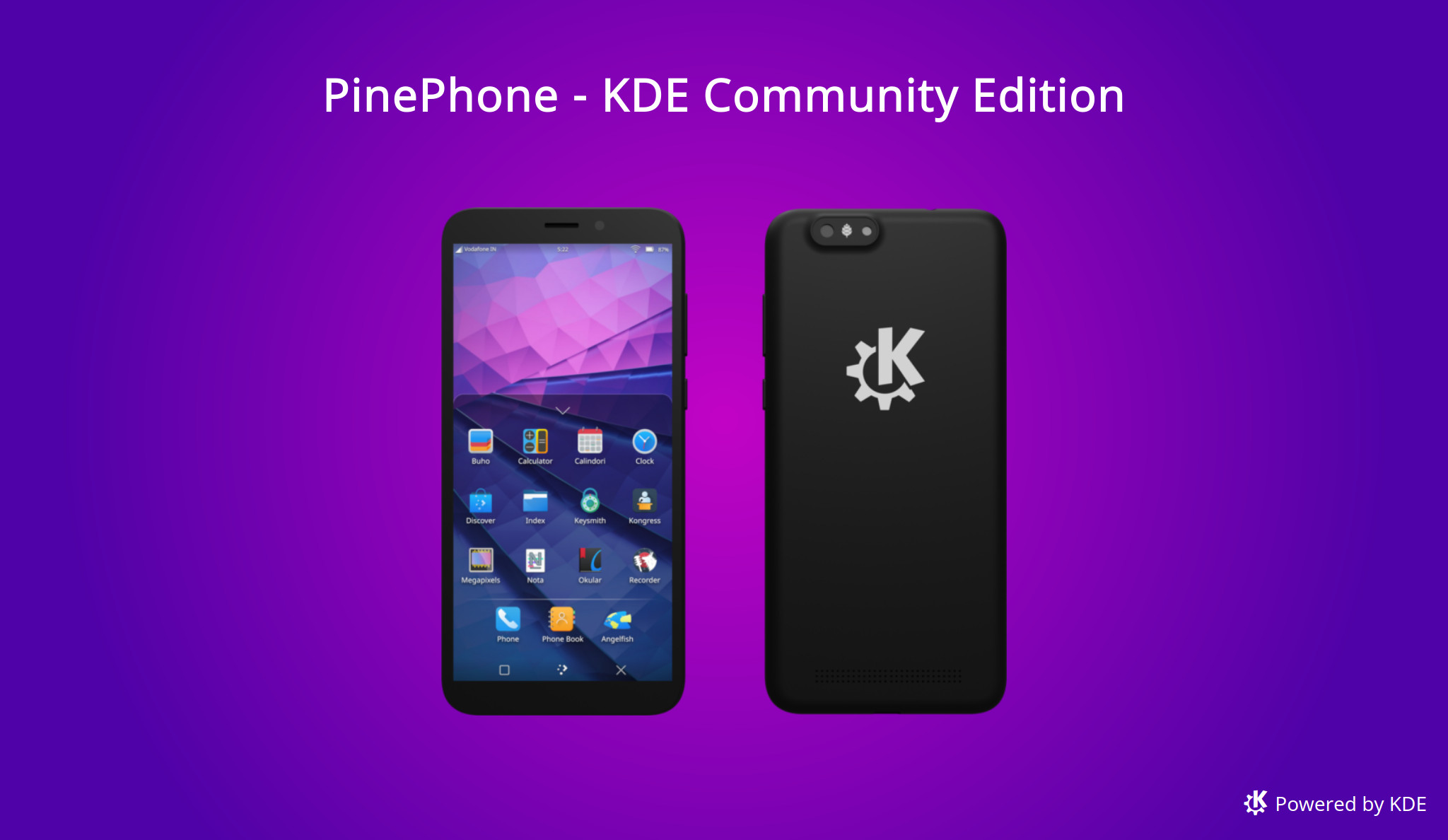 I absolutely adore the little Pine icon on the back!

I have to admit, I've always loved the idea of being able to just hook up a tiny portable device like this into a full desktop like environment. While you can build your own using the likes of a Raspberry Pi and other tiny boards, having a ready-made all in one specially made solution is great too.

Here's the specifications they sent over:

According to the folks at Pine64, the phone will be running mainline Linux and there's open source drivers for all main SoC components. It will be running Plasma Mobile, which is a developed by free software volunteers and you can follow the progress of Plasma Mobile on this dedicated site .

They said that pre-orders will be open on December 1, with "all proceeds" going to the KDE e.V. which is a non-profit that represents the KDE Community in legal and financial matters.

Plasma is arguably one of the prettiest Linux desktop environments around, and it's highly configurable too. The KDE team just released a huge upgrade with Plasma 5.20. This is a massive release that upgrades all parts of the Plasma desktop.

Fans of Wayland which is gradually replacing X.Org, compatibility continues being a focus and they've managed to make more steps as of this release. They mentioned that since 2019 they set a priority goal to adapt everything to support Wayland and it's "starting to pay off big time" now. As of this release middle-click paste with the Klipper clipboard app now works, plus the launcher/search tool KRunner now shows up correctly. Mouse and Touchpad support is getting close to being on par with X too, screencasting is now supported and more. Lots of steps taken.

That's just the under-the-hood stuff, tons of user-facing changes and improvements can be found across the whole desktop like the task manager being icon-only by default. A nicer default I think, as grouped icons look great and save precious space.

There's also new on-screen displays when you perform various actions like adjust volume, the system tray pop up now uses a grid rather than a list which looks a huge amount better, the digital clock widget is a bit more compact and has the date by default, the ALT keybind to hold and then drag windows around was moved to the Super key (also known as the "Windows" key) which is a nicer default with so many games needing the ALT key it was a common interference and the list of subtle improvements goes on for some time. Little things add up, and sane defaults are seriously important.

You can also find a newer Plasma Disks application which will add storage drive S.M.A.R.T monitoring directly into your System Settings — nice!

Check out their new release video: 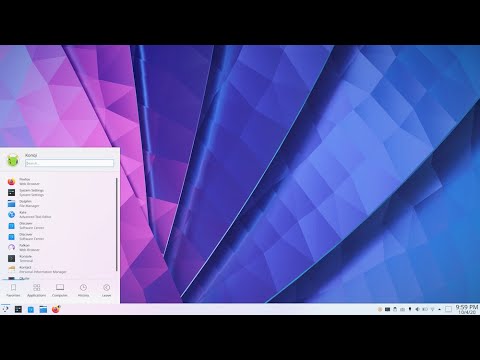 While GNOME recently had their own big release , the KDE team aren't far behind for showing off their latest modern Linux desktop environment with Plasma 5.20 Beta.

Lots of work went into the look and feel of this release with one of the major changes here is the move to using an Icon-Only task manager by default, plus the panel is slightly thicker. So instead of seeing window / application names, you get a tidy bar full of icons. Do popups annoy you? They get on my nerves and thankfully the KDE team are looking to improve that too. On-screen displays for things like changing volume and brightness (just examples) have been redesigned to be less obtrusive — hooray. 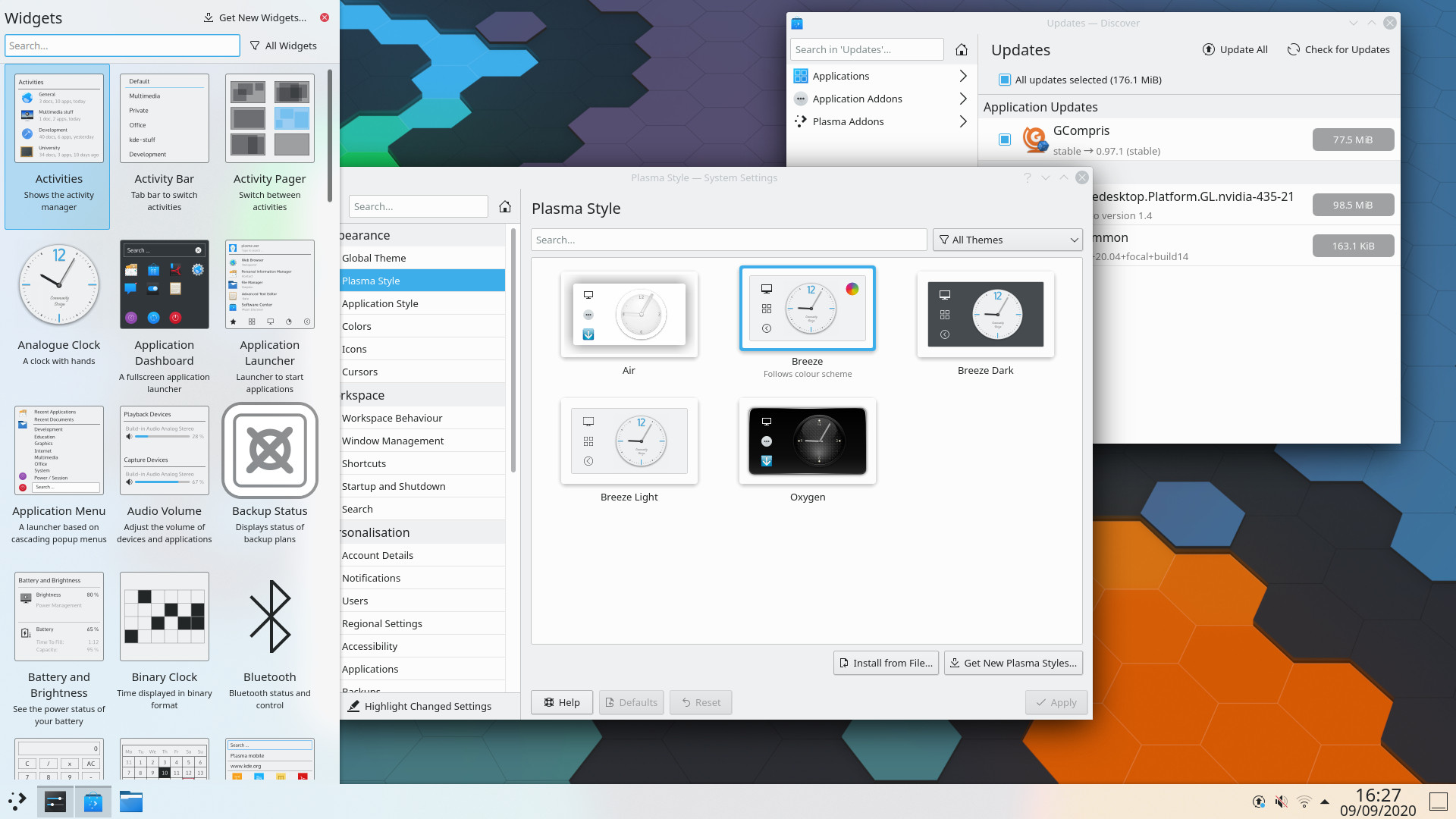 More look and feel adjustments to be found elsewhere, like changing brightness now giving you a smooth transition between the modes. With the system tray there's now a grid for the pop-op rather than a list, the digital clock will now show the date too by default, the pop-up for it is also more space-efficient.

Workspace behaviour changed a bunch too. One particular default I am happy to see adjusted is the shortcut for moving windows around to the Meta/Super key (also known as the 'Windows' key) + dragging instead of ALT + dragging. For gaming, it makes a big difference, as ALT is often used in games and Plasma ends up often overriding the game input and tries grabbing the window. Good defaults are needed to prevent frustration. It's a small thing, but small things add up in big ways.

Another useful little addition is the ability to middle-click the notifications applet or system tray icon to get into a Do Not Disturb mode. You will also now be told if your system is about to run out of space, even if your home directory is on a different partition - quite important that.

As for Wayland support, that's coming along nicely too with more improvements:

Plasma is a desktop environment for people who love both shiny looks and tons of configuration, I've often joked that it has options inside of options and that's somewhat true, there's so much you can do with it and set it up exactly how you want. Looks like they're continuing to put tons of effort into making it a great desktop choice.