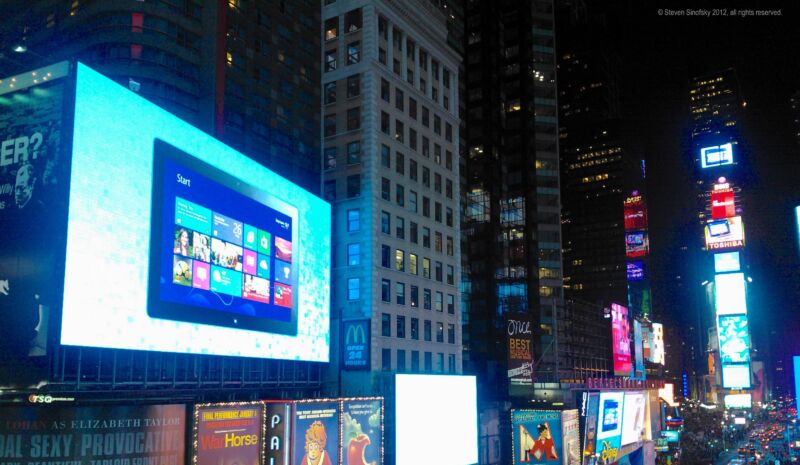 Enlarge / A billboard showing Windows 8 in Times Square in New York at the Microsoft Store in October 2012. (credit: Personal photo from Steven Sinofsky)

On October 26, 2012 , Microsoft released Windows 8, a hybrid tablet/desktop operating system that took bold risks but garnered mixed reviews . Ten years later, we've caught up with former Windows Division President Steven Sinofsky to explore how Windows 8 got started, how it predicted several current trends in computing, and how he feels about the OS in retrospect.

In 2011, PC sales began to drop year over year in a trend that alarmed the industry. Simultaneously, touch-based mobile comping on smartphones and tablets dramatically rose in popularity. In response, Microsoft undertook the development of a flexible operating system that would ideally scale from mobile to desktop seamlessly. Sinofsky accepted the challenge and worked with many others, including Julie Larson-Green and Panos Panay, then head of the Surface team, to make it happen.

Windows 8 represented the most dramatic transformation of the Windows interface since Windows 95. While that operating system introduced the Start menu, Windows 8 removed that iconic menu in favor of a Start screen filled with "live tiles" that functioned well on touchscreen computers like the purpose-built Microsoft Surface, but frustrated desktop PC users. It led to heavy pushback from the press, and PC sales continued to decline.